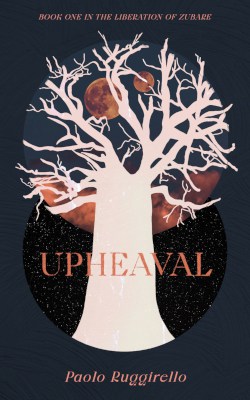 Upheaval: The Liberation of Zubare

Musashi Greca, leader of the Greca Farm Clan, strives to liberate his island from an oppressive ruling empire that is stripping the island of its resources. Taxes became insurmountable and tension lays heavy in the air. The citizens threaten to revolt and the soldiers stand eager to kill. When the soldiers raid the Greca Farmland, his proteges, Miami and Aiko, must enlist the help of a strange man and even stranger dog. They set out to meet an influential benefactor, only to discover he is also on the run! Left with nowhere to go and no one else to rely on, it is up to these four. Can they liberate the island and expel the Kantohrian empire? Will they find Musashi or any other members of the Greca Farm Clan? Will the island itself be swallowed whole by a savage civil war, soaking the land with the blood of innocents?