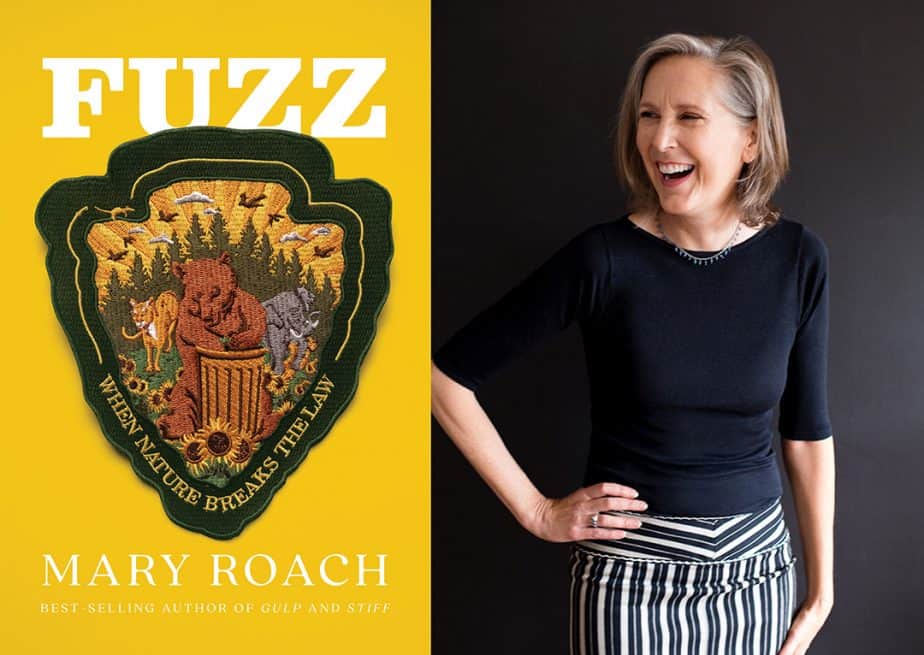 in conversation with Erik Larson

Join “America’s funniest science writer” (Washington Post) on an irresistible investigation into the unpredictable world where wildlife and humans meet.

What’s to be done about a jaywalking moose? A grizzly bear caught breaking and entering? A murderous falling tree? New York Times best-selling author Mary Roach knows the answers are best found not in jurisprudence but in science: the curious science of human-wildlife conflict, a discipline at the crossroads of human behavior and wildlife biology. Combining forensic science and conservation genetics with a motley cast of laser scarecrows, langur impersonators, and trespassing squirrels, Roach reveals as much about humanity as about nature’s lawbreakers. When it comes to “problem” wildlife, she finds, humans are more often the problem—and the solution. Fascinating, witty, and humane, Fuzz offers hope for compassionate coexistence in our ever-expanding human habitat.

Free to attend, registration required. We hope to “see” you there!

A copy of the book, which includes a bookplate SIGNED by Mary Roach, can be purchased in advance using the button below!  Books are provided by Magers & Quinn Booksellers in Minneapolis; purchasing FUZZ here helps support them AND Rain Taxi’s Twin Cities Book Festival—thank you!

BUY THE BOOK: Ship to your location

Mary Roach is the author of six New York Times bestsellers, including STIFF: The Curious Lives of Human Cadavers; GULP: Adventures on the Alimentary Canal, and PACKING FOR MARS: The Curious Science of Life in the Void. Her new book FUZZ: When Nature Breaks the Law, debuts in September 2021. Mary’s books have been published in 21 languages, and her second book, SPOOK, was a New York Times Notable Book. Mary has written for National Geographic, Wired, The New York Times Magazine, and the Journal of Clinical Anatomy, among others. She was a guest editor of the Best American Science and Nature Writing series and an Osher Fellow with the San Francisco Exploratorium and serves as an advisor for Orion and Undark magazines. She has been a finalist for the Royal Society’s Winton Prize and a winner of the American Engineering Societies’ Engineering Journalism Award, in a category for which, let’s be honest, she was the sole entrant. More at www.maryroach.net.

Erik Larson is the author of six New York Times bestsellers, including Dead Wake: The Last Crossing of the Lusitania, and The Splendid and the Vile: A Saga of Churchill, Family, and Defiance During the Blitz, which both hit no. 1 on the Times list soon after launch. The latter is in large part a domestic drama that examines how Winston Churchill and his “Secret Circle” really went about surviving the German air campaign of 1940-41. Larson’s The Devil in the White City is set to be a Hulu limited series; his In the Garden of Beasts is under option by Tom Hanks, for a feature film. He lives in Manhattan with his wife, who is a writer and retired neonatologist; they have three grown daughters.