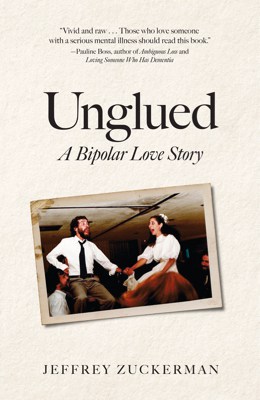 Jeffrey Zuckerman’s harrowing five-year ride began months before his wife Leah was diagnosed with late-onset bipolar disorder. After thirty years of marriage, Jeff nearly became unglued himself as the woman he loved endured an agonizing manic episode and severe depression. Struggling to manage his own self-care and keep his sense of humor, Jeff needed to learn how to overcome the stigma, loneliness, and guilt that accompanied his wife’s battle with a mood disorder.

Newly released, Unglued: A Bipolar Love Story is the first memoir that focuses on the exhausting practical and moral choices a family member must make when loving someone with a severe mental illness. Candid, funny, refreshingly irreverent, and ultimately hopeful, Jeff’s story chronicles the power of compassion, faith, and resilience in the survival of a marriage and a caregiver’s own well-being.