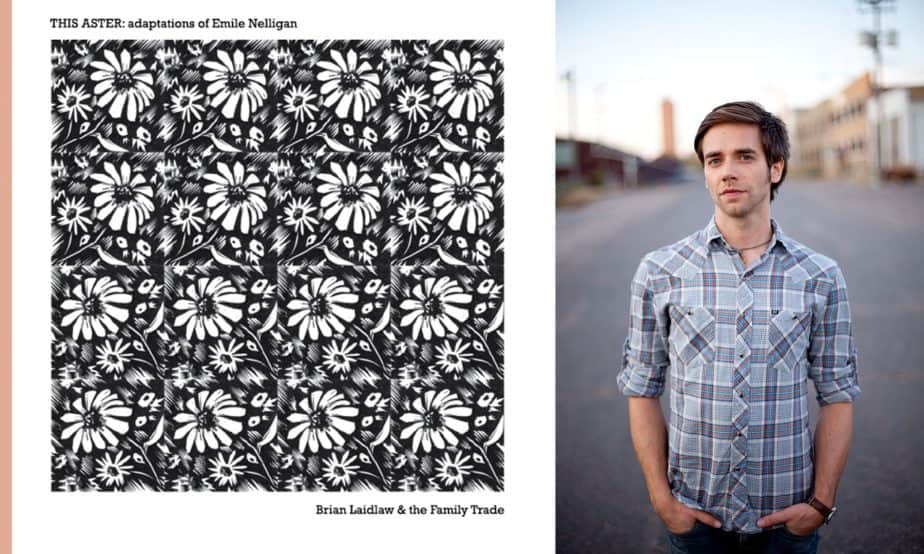 The Adaptation Station is a magical switchyard where poems turn into songs. Bring an old favorite poem (or better yet, a new favorite poem from a book you just bought at the TCBF!) and poet-songwriter Brian Laidlaw will songify the text and set it to music on the fly. Brian’s latest album This Aster: Adaptations of Emile Nelligan, debuting at the Festival, arose through a similar process, so perhaps the Adaptation Station will yield some lovely new music—or perhaps the results will be awkwardly wonky. That’s all part of the adventure!

Brian Laidlaw is a poet, songwriter and educator from Northern California. He earned an undergraduate degree in Creative Writing from Stanford University, and spent several years as a touring folksinger afterward; he went on to earn an MFA in Poetry at the University of Minnesota, and then to join the Songwriting faculty at McNally Smith College of Music. Brian’s had lyrics published in American Songwriter Magazine and songwriting credits on several Grammy Award-winning and -nominated albums, most recently Winterland by The Okee Dokee Brothers. Brian’s own releases include the LP and poetry chapbook combo Amoratorium, and two full-length poetry collections published by Milkweed Editions, The Mirrormaker  and The Stuntman. A new LP and translation folio called THIS ASTER: Adaptations of Emile Nelligan is newly out from Fonograf Editions. Brian recently completed a Ph.D. at the University of Denver, and now mentors neurodivergent poets and songwriters with Unrestricted Interest, a company he co-founded with poet Chris Martin. Brian continues to tour, both solo and with his band The Family Trade, and moonlights (often literally) as a rock climber.